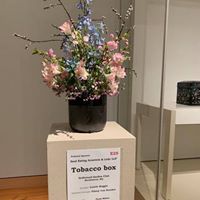 So much talent!
In addition to helping other members dig and divide for the May 11 Plant Sale, Driftwood Garden Club board members Laurie Boggis and Ginny von Rueden applied their skills and creativity to an arrangement featured in the Museum of Fine Arts annual Art in Bloom exhibition. Art in Bloom pairs selected garden club arrangers with a carefully chosen object from the MFA’s vast collection. Laurie, the lead designer, and Ginny were randomly assigned the 19th century Korean tobacco box shown in the photos. Taking their cues from the box’s inlaid design, they used a black vase and flowers in delicate shades of pink and blue with silvery tones, and incorporated the lovely vine motif in their arrangement. The Korean object was especially meaningful to Laurie, whose daughter was born in Korea.
Monday, April 29, DGC members toured the MFA to see Art in Bloom and cheer on their fellow gardeners. Brava, Laurie and Ginny, you make us proud!